By Leafshade,
November 23, 2016 in Scammer Registry 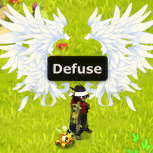 It's such a shame that Timeless decided to go down the road of scamming, he had the skill to be one of the biggest players in the game not only on international servers but also on French ones. I know